Yesterday I got new glasses with progressive lenses and felt a need to try it out. It turned out to be a great improvement. It was a very nice day with a mixture of clouds and sunshine; ideal conditions for a bicycle trip.

I sat down on a bench in Colliery Dam Park to focus on a small section of forest across the lake and started doodling with the water colours on Fabriano 1264 paper. It was great to alternate between looking close-up on my sketch-block, with distant observations of the subject within a split second. Just like it should be.

Today it looks like the rain season is seriously considering to take over the summer weather that we enjoyed recently.

After suffering through a recent heat-wave, the weather has returned to normal summer conditions, a mixture of sun and clouds with 30% chance of showers. The latter is desirable, but did not happen.

I rode my bike to several places on various roads (sidewalks mostly) and trails, to end up at Colliery Dam park while stopping here and there to make some sketches or scribbles. Also took time out for more blackberries along the trail.

My first stop was at Buttertubs Bird Sanctuary. This is a marsh land or popular City Park with viewpoints, benches and a tower providing observation posts for birders. This facility provides a well used, level hiking trail, all the way around the marsh with mostly deciduous bushes and trees. It makes you feel like you are out of town, except for the parking lot, where a large apartment building is under construction.

When I arrived at the Colliery Dam park, there was almost nobody else around; very unusual for this time of the year. The lake behind the dam was originally used to wash coal for one of the several coal mining companies that started Nanaimo around the late 1800’s and early 19th century.

The lake is said to be very deep and is used for swimming and fishing trouts that are stocked up in the fall. Today there were only two boys sitting on a diving platform, that is floating in the lake.

I made two sketches from the same group of trees across the lake, one in pen and ink and the second one the same, except with water colour added. I really enjoy doing this.

Tree along the shore using pen and ink scribbling.

Lately I favour my cheap little 6”x9” sketchbook from the dollar store. It has 70 lbs cartridge paper that is sized for pen work and handles light washes from a water-brush very well. You have to get used to it because it soaks up the water. The whole set-up travels light when walking or cycling.

Next effort was a watercolour starting with pencil in an effort to omit the pen and ink altogether.

I want to try watercolour on itself more often, but with an easier subject that has well defined geometrical shapes, such as a house or building.

Today was perfect for taking my bike out of the storage room and explore he town, after being stuck at home for some time. My first stop was at the corner of Wallace and Fitzwilliam, across from New York Pizza where one can sit comfortably on a bench in a small park between the flowers. From here you can look across the valley with the old highway and Cliff Street at the bottom, and see the buildings on the other side. The view is partially blocked by a massive big-leaf maple tree.

About a hundred years ago, there was an inlet at the bottom of this valley, before it was backfilled with waste from coal mines.

The next stop was at the University campus, which looks like a park at this time of the year, strangely enough deserted,except for some service trucks and security guards.

Here I sat down at a station dedicated for smokers, which is usually well occupied but not today. That provided me with the opportunity to settle in and make a sketch of the gymnasium, with the sciences building in the background.

The peculiar arch is a left-over from the original arch-shaped building, that was later modified to the square box as it appears today. The building behind it has the air plenums mounted on the exterior; an interesting architectural feature.

Last Monday the weather looked almost perfect for a bike ride. Although it was cold, it was not raining and occasionally the sun peeked through the clouds when I left the downtown area. Gloves and earmuffs were necessary to stay reasonably comfortable.

Anyways I decided to make a stopover at the Harewood mall, which was recently expanded with new buildings that included a Tim Hortons, you know the familiar ‘one and only’. While sipping my coffee and eating an apple fritter I made a sketch of a drive-through located across the road.

Shortly after I left from here, the rainy weather resumed in the form of a drizzle and I had to peddle fast the get home.

On last Sunday’s bike-ride I took a break at the Colliery Dam park, as usual, and sketched this scene to try my new lightweight palette consisting of mute coloured pigments only. Generally referred to as earth-colours.

In addition to a black fude fountain pen, I applied raw sienna, burnt sienna and vandyke brown on cheap sketch book paper with a pentel waterbrush, less than ideal for watercolour applications, but reasonably useful for this purpose.

It is amazing how much fun you can have playing with value-schemes in a scene when colours are ignored, and how coherent the end result turns out.

After missing out on using my bike for more than a week, I decided last Saturday to go for a ride and make only short stops to sit down for coffee or for sketching. It was tough riding up the steep slope on Caledonia Avenue, and halfway up I had to dismount and walk to get to the top of the hill, huffing and puffing. After reaching the E&N trail everything went fine.

My first stop was very close to home at the market on Pioneer Plaza. What prompted me to stay here was the live music performed by a jazz trio; absolutely delightful.

After lunch a made a stop at Beban Park, which has a swimming pool and an ice arena. Judging by the mostly empty parking lot, there was hardly anybody there. I like the challenge of drawing the waterslides that exit the building like giant worms from some horror movie. The roof of this sports complex is suspended with cables from a series of steel frames, somewhat unusual, but quite spectacular. There is an electrical vehicle plug-in station with a Zamboni in the process of getting charged up. Although it was outside my field of view for this picture, I felt like adding it in and thus moved it over.

The last stop was close to downtown again in Maffeo-Sutten park, where I often like to sit down and watch people go by while doodling in my sketchbook.

These dilapidated barns are located in Beban Park. Part of this area is the venue for the annual Vancouver Island Exhibition (viex.ca), which is this year commemorating the 125th fair from August 23 to 25. It is an agricultural fair with an amusement park featuring spectacular rides and games, rock bands and generally a lot of fanfare.

It was very quiet on a Sunday afternoon when I made this sketch; nobody around in this neck of the woods. However, other areas at Beben such as the tennis courts, soccer fields, golf course, swimming pool and skating rink, BMX track, gardens and playground were all in use.

Another frequent stop on one of my favourite bicycle routes is Stone’s marina with the floating old boathouses that were built and maintained by different owners over many decades. The forested area of Newcastle island is the backdrop in this picture. Could have been or maybe should have been a bit darker, but there is always ‘next time’.

Both of these sketches were made on the same Sunday, about 2 weeks ago, when I only carried a very small tin box with only 4 pigments in it and a water brush, in my backpack.

There are several comfortable benches on the campus of the Vancouver Island University (VIU) such as the one in front of the cafeteria with a view of the library building.

I settled in for a couple of hours to carefully draw the front of this building facade with all the frivolous architectural details.

Notice that above the lettering “Library” their is a faint picture of an arbutus tree that I tried to copy. This used to be the emblem of the Malaspina College, now referred to as the VIU. This institution appears to be ever expanding and is a real asset for the people of Nanaimo and the mid-island in general.

One has to be in good physical shape to attend school or work on this campus, as the stairs from the bottom to the top of the hill probably count close to 200 steps.

The last few days were perfect for bike rides and pausing in a warm sunny spot to make a sketch. This picture is a view of the lagoon in Swyalana Park near the downtown core, showing Cameron Island and its reflections.

Next is a view of the city core as seen from Machleary Street, where the Malaspina Lodge used to be since 1925 or so untill it was demolished about a year ago. I made use of one of two lawn chairs that were left at the site to sit down and make this sketch.

The sketchbook (6″×9″) that I carried in my backpack was too small to record all the big and small buildings and trees that were spread out in front of me at the bottom of the hill. I have to return with better equipment hoping that the chairs will still be there and before the empty site is filled up with another apartment building.

We enjoyed exceptionally nice weather this week to go outside and make some sketches before the upcoming rain season directs us indoors.

This is a 9″x16″ drawing of the Howard Johnson. Rumour has it that it will cease operations before too long. It is obvious from the architecture has it has been here for 50 years or so.

These two quick sketches were made along the waterfront on 6″x 9″ sketch block to try out my new sailor fude pen. 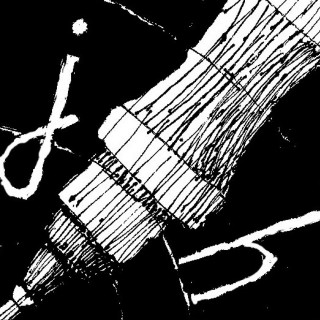